I was trying to make a route between different points in a layer. The route seems well optimized, but there is a problem I can’t resolve.

As you can see in the attached photo, the route goes from one to another, but it makes a 180º turn in the middle of the road.

I have searched several websites, but I don’t find any option to make the route continue respecting the traffic laws. ¿Could you help me? 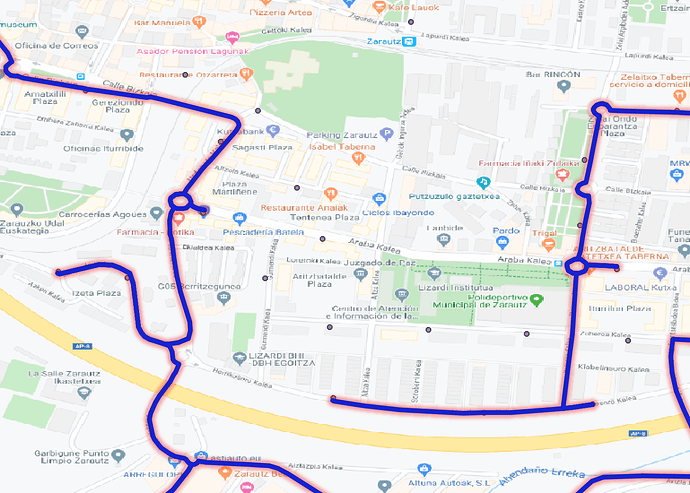 Please provide the route query and a picture that shows exactly what part of the route your problem is in, and includes the whole route.

How I understand it is that rather than making u-turns the route should pass straight through the via points. I’m not sure though whether it is possible to enforce such behavior when used in combination with the optimization endpoint. Was this your use case and primary concern @dpmtommy?

@andrzej, that’s exactly the point. I understand it is the shortest way between the points, but in my case I’m trying a route with a truck, so a u-turn is impossible for me unless I arrive to a roundabout.

I’m trying to make a route for a garbage-truck and I have to leave the points in the layer at my right side following the route (this, right now, is a secondary worry for me, so I’ll check it out later).

I need to calculate the total distance, so I can know the time it takes for the driver. So with this issue I obtain less distance in the route than the real.

@HendrikLeuschner, I’ve prepared a link with the files in wetransfer. I’m not sure if I’m allowed to post the link but I’ll try. It is not the whole project but I think it shows the point. I have uploaded 4 files: the point layer data, the created route, a capture of the configuration I used, and a capture of the point of the problem and what I understand the truck should do over the route itself.

I’m definitely not an expert, but if this is not possible right now, maybe could it be done adding an orientation angle of the inicial and end points of each part of the route and if they are not the same adding another part starting and finishing in the same point?

Thank you very much for your feedback.