After formating, installing a fresh Ubuntu 20.04 and setting up ORS backend (fix-docker branch) and frontend, it shown a different error that wasn’t appearing before.
I did the same steps that worked on Ubuntu 18.04 but now this error appear, both with grunt ors and grunt ors_local. 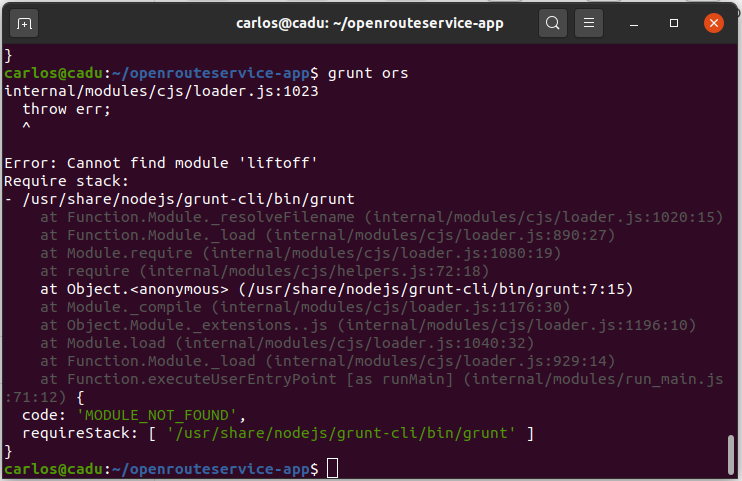 I tried npm install liftoff but the error still.

This file has been truncated. show original

Not a big JSer, but if you installed grunt with sudo you probably will have to install liftoff with sudo as well.

I don’t have a running 20.04 environment. So i won’t be able to easily test this.

I’ve seen that topic and uninstalled nodejs, nvm and npm.
What is the recommended way of installing these packages? (including grunt)

Well, after uninstalling these packages I did this way and worked:

Allowing nvm being used by my profile
source ~/.profile

I was still having permission issues with grunt, so:
sudo chown -R username ./*

Now grunt ors_local worked.
I’m not sure if all of this is necessary, since I fetched it from random tutorials on the internet, but that was a solution.

I’m glad it worked out for you!

Both grunt-cli and grunt itself should be installed once you do an npm install in the root of the cloned repository. So normally there should be no need to install it again.

But i also just saw, that in our travis configuration we also install grunt-ci globally. Might have been the same issue.

I will add something to the README soon.