I’ve realized that ORS routes through highway=footway in the bike profile, even when there is no bicycle=yes.

I think that we should have an option to enable/disable this, here in Spain, bikes are not allowed on sidewalks/footways, BUT they can go if you are dismounted. My solution is to have a switch in the options like “avoid dismounting”, so ORS only routes through footways/paths that have bicycle=yes or bicycle=designated, and have a chart like the “way types” that indicates which part of the track is mounted and which dismounted.

Because most cities do not have an adequate bike infrastructure, and is very segregated, and sometimes we have to cross “zebra crossings”, or through “pedestrian squares” to reach from one cycleway to another, and this is “ilegal”, so this is a way to take into account those parts of the journey, and be aware that the route is not 100% “bike made”.

I use ORS to make a GPX track file, analyze it (track type, road surface, etc) and import it to OsmAnd for navigation, and it that “analyzing” fase I want to know when I will face a part of the way in which I should dismount, and to see if a little workarround is worth it, and don’t realize when the route is taking me through a sidewalk when I’m actually in the field.

My “favourite” example is this:

This two cycleways are not joined together, so to cross from one to another (from east to west), the “correct” way is to stop at the crossing, dismount your bike, cross it, and continue to the roundabout until meeting the other cycleway: 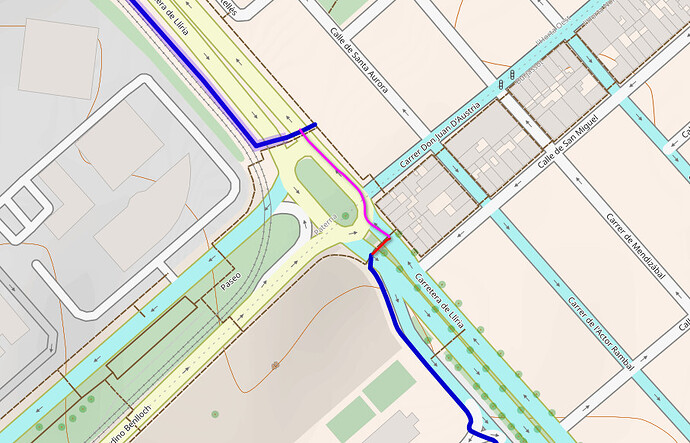 It will mark you that you are in a “pathway”, but there is no difference between a path with “bycicle=yes”, and without it.

*This tag can only be used when the dismount is mandated by an special sign, not in footways or paths that are only for pedestrians.

What’s your opinion on this? Thank you!