Hi
Im trying to add a new layer ( via Leaflet?) consisting of a geojson multi polygon file, im struggling to find which way to do this as a back office function.

Could you point me in the correct direction please?

Have a look here:

Plugin for the Leaflet JavaScript library to show areas of reachability based on time or distance for different modes of travel using the openrouteservice isochrones API. - traffordDataLab/leaflet....

Hi Nils
thank you that Im a bit confused however as how this would work using my cloned version of the ORS app - which files would I change when the article talks about ‘After including the CSS and JS in your page’? as below 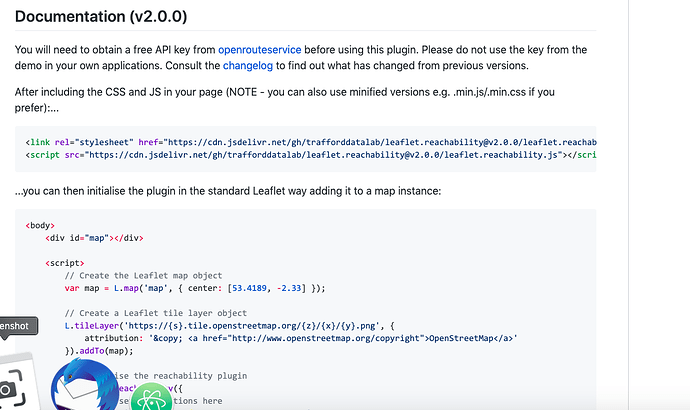 so in a similar example you would see the administration boundaries of a city or town, then you would select a time/distance isocrome to identify how much of the city boundary is covered by the city fire service, ideally the isochrome would be truncated at that boundary but thats not too necessary
Any other thoughts? or even if you can tell me which file to edit/add the plug in from github as you mentioned.
Sorry Im trying to learn as Im going

Oh, you should’ve mentioned that you’re trying to clone our web app. In that case forget the leaflet plugin.

that’s not too clear;)

I have no idea about the web app, maybe @amandus can help.

This bit ,the intent is to generate isochrones via a local version of the openrouteservice PI, meant to say that opening the ORS API as a local version by using grunt -ORS and then generating the isochrones from the GUI but the map would show the geojson polygons and Fire Station Icons

How do I catch Amandus?

Hi Nils
No answer from Amandus
Any suggestions?